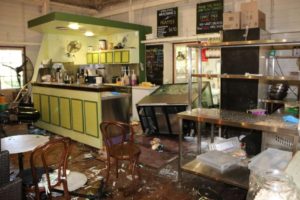 A melee broke out early this morning at a coffee shop in the Williamsburg section of Brooklyn between those waiting in line to order their tall, grandes and ventis and the steady stream of customers who ordered online and sauntered past them to grab their waiting drinks.

The trouble reportedly began when a Con Ed worker, stuck ten deep in the queue, yelled “hey asshole, get in line like everyone else,” to a twenty something man in skinny jeans and a pork pie hat as he took his mobile order and scurried out the door.

Moments later a distraught woman in line, believed to be a sales clerk from a nearby Modell’s Sporting Goods store, screamed to the next fleeing customer to “play by the rules, douchebag.”

It was soon after that the rows and rows of cups waiting to be filled from virtual orders began to dwarf those from actual people. Apparently that’s when it became too much for many of the dozen or so patrons herded between the faux velvet ropes to stomach.  An unknown number of the caffeine deprived mob stormed over the counter and, facing little resistance from the baristas, threw anything they could get their hands on at those coming through the front door.

A woman who would not give her name but identified herself as a ‘bi-millennial creator of moving images’ said, “It was bedlam. Frappuccino’s, cappuccinos and innuendos were flying across the coffee bar. I almost got hit in the face by a frozen low fat turkey bacon sandwich when I walked in the store.”

Another onlooker, who gave her name as Fall Harvest, mentioned that “it was kinda like some of the fights I’d seen in the city when I’m bumpin’ the poe’ at Melons – except here everyone was afraid of getting hurt.”

Alan Brown, a self-described social activist, witnessed the confrontation from his usual corner table. “I had been here an hour, maybe three, when things heated up. Very confusing because when it happened the line for mobile orders had become longer then for those already standing inside. Or vice versa, I’m not sure.

“Anyway, you could smell trouble brewing. It wasn’t long before the place was, I’d say, ‘bout a half and half mix of those online and those in line. And it turned sour real fast.

“What the world saw today,” he observed, “was a textbook example of members of the working class at each other’s throats while our greedy overlords profit. We’re all stuck in some sort of line, man, and yet we can’t, or won’t, see it.” Brown said.