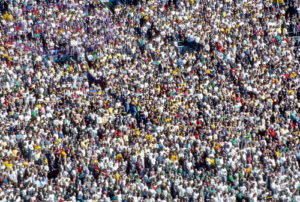 In a disturbing report prominent scientists now believe inbreeding dates back to the very dawn of mankind; their work confirming that every man, woman and child is related to everyone else living or dead. That common thread, they say,  is responsible for the many inexplicable decisions and actions people take.

Prior to this study it was a widely held belief that with billions and billions of people passing through the course of humanity the ‘crazy’ would have long ago been diluted to the point of insignificance. Not so, according to the findings from a consortium of scientists, historians, sociologists and 911 operators.

It had also been thought that only carnal relationships between immediate family members or close relatives were a cause of concern for diminished competence or health issues. However, using computer modeling and analytics which examined historical records as well as  DNA, Twitter and Facebook it has been confirmed that the entire gene pool is polluted.

“The rise in the popularity of reality television and a never-ending series of senseless world events really jump started the study.” said a member of the panel who did not want his name used until the report is made public. “And the evidence goes a long way to help explain the stupid in all of us.”

“Until now,” the panelist continued, “nothing in science could give us an understanding of the unraveling of basic common sense and judgment seen throughout history. The conclusions of this study, showing the effects of massive inbreeding, are hard to argue with. How else, for example, do you explain the modern day Republican Party.

“What this tells us is that there is a fundamental flaw in our genetic makeup. Short of taking some very abrupt changes or coupling up with an advanced alien species we’re only going to continue to make the same self inflected mistakes over and over. As a race of people, don’t count on a pretty ending.”