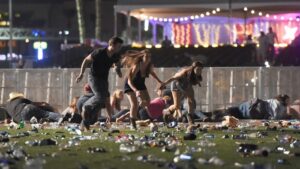 A senior executive at the National Rifle Association reportedly told board members that the organization needs to promote the idea that people who gather in large groups have to take some responsibility for mass shootings.

The source, who attended the closed meeting but asked not to be identified, said those in attendance “went through stages of denial right up to acceptance in no time. They pretty much agreed that if people worried about being randomly maimed or killed by an assault weapon at schools, concerts, work, churches, synagogues, bars, sporting events, Walmart’s – really wherever people gathered – they should stay home.”

One member was said to have voiced concern that such a position would appear to conflict with the First Amendment’s right of people to peacefully assemble.  Shortly thereafter, and in keeping with the NRA’s board policy that all votes should be unanimous, the dissenting member was asked to leave before the ballot took place.

“As long as we’re seen as doing something that further places blame for gun violence on people who don’t carry guns, we’re making our case,” said the source.

Later, members discussed the upcoming contributions to President Trump’s re-election as well as calling for moving the 2nd Amendment to first place.

The NRA was founded in 1871 to help improve the marksmanship of Union soldiers and educate gun owners in handling weapons.  For many of its early years the NRA was an advocate of restricting gun sales, opposed “open carry” as well as mail order purchases and backed other gun control initiatives. They also operated a competitive firing range for its’ members on a site which later became, fittingly, a state mental institution.

However, since the early 1970’s, its mission has been to arm practically anything that casts a shadow, prevent gun legislation in any form and, through its extensive lobbying, pay off politicians to support their position.

2 Replies to “NRA: Large Crowds Of People To Blame For Mass Shootings”