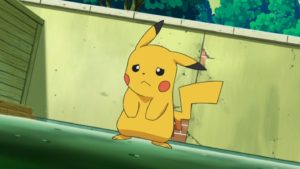 Pokémon, the popular game character and once considered to be on Donald Trump’s short list as his vice presidential nominee, is said to be under investigation by the Justice Department.

The rumored indictments result from information that was uncovered when Mr. Trump’s team and the federal government were running a background check during the vetting process. The charges relate to his ‘Pokémon Go’ scheme and include child endangerment, conspiracy to commit criminal trespassing, the use of an electronic device across state lines in the furtherance of criminal activity and tampering with the witless.

A Trump spokesperson denied that Pokémon had ever been thought of as a running mate. However, a source within the campaign acknowledged that was not the case. She added that the diminutive Internet sensation was yet another reason New Jersey Governor Chris Christie was eventually dropped from consideration.

‘Christie being Christie made that elf or whatever it is look good by comparison.  Donald, while not entirely sold on Pokémon, liked the fact that he appealed to a wide audience, was popular in the media and could lead seemingly rational people on wild goose chases.

“It was only after the feds informed us of possible criminal charges being filed against Pokémon that we took a second look at (eventual nominee) Mike Pence.”

A political consultant who works with the Republican Party added it’s surprising that Christie or Pokémon were considered at all. “There really is only room for one cartoon character on the Trump ticket and that’s Donald.”

When asked about the charges against him, Pokémon led the reporter to an abandoned mine shift.