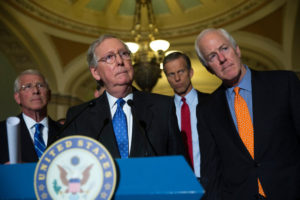 Republicans see a bright side if Hillary Clinton becomes President, a second chance to impeach her husband. “Seeing Mr. Clinton face Congressional scrutiny will become the Senate’s first order of business if she takes the White House” a spokesperson for the Republican Party said.

The biggest supporter for reopening the Monica Lewinsky debacle and other unfinished legal matters is thought to be Senate Majority Leader Mitch McConnell of Kentucky. He is reported to be consulting with Kenneth Starr, the former prosecutor, to see how best to proceed should the opportunity arise.  They believe that as soon as the ex-president joins his wife and lives in the White House they’ll have sufficient cause to prosecute him for any federal statures he may have broken while in office.

Philip Henry, a dean of law at New York University, disagreed. “I don’t know of any case law where moving into the White House can of itself allow for charges being filed against a resident. Plus, impeaching the spouse of a President seems to be a bit of a stretch.”

McConnell is also taking credit for making good on his promise to end Barrack Obama’s presidency. He had been quoted in 2010 as saying “Our No. 1 priority is to make this president a one-term president” which resulted in an historic lack of cooperation between Congress and the Executive branch.

The GOP spokesperson went on to say, “Thanks to Senator McConnell and other Republican members in Congress, Obama and his agenda was effectively shut down when he took office. As both the minority and the majority party we blocked virtually everything Obama suggested.

“We made good on our pledge to the American people to refuse to even consider any of his proposals. By doing so we prevented any harm that the passing of universal health care, Wall Street oversight and immigration reform might have had. We also stopped his judicial and federal appointments, the expanding of social services and didn’t even bother to look at his final budget or Supreme Court nominee.

“And, remember we were successful despite the backing he had from the majority of the American people who twice elected him. Who says we weren’t busy over the last few years?  It just took longer than we expected to get rid of him,” the spokesperson added.

When asked if term limits had anything to do with President Obama leaving office she responded that it was “merely coincidence.”