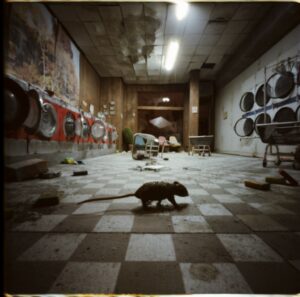 A melee broke out in the Congressional Laundry Room when members of the House of Representatives came to blows over the meaning of “separating the coloreds from the whites”.

According to a maintenance worker, who spoke off the record, the fight was said to initially begin when Alexandria Ocasio-Cortez, a newly elected New York congresswoman confronted Iowa congressman Steve King after she overheard the remark. When the long-term Hawkeye, known for his history of racially insensitive comments, replied that his mother had told him “it was the only way to keep the whites, white,” they both ended up tumbling to the ground.

Soon after that other elected officials in the room became involved in scuffles. Another witness, who would not give her name because she is a lobbyist romantically involved with members of both parties, saw groups of unlikely alliances form as members of far right and left wings banded together to bully those who they considered centralists.

Said the source, ”It was like a middle school fight. A bunch of crying, hair pulling, slapping. Supposedly someone give the majority leader a wet willy.”

Investigators from the Capital Police have so far been unable to stitch together even a preliminary finding. According to a detective close to the investigation the participants and witnesses have since “divided themselves along party lines. You ask a question and all you get is talking points back in return,” said the officer who asked not to be identified. “It’s like listening to CNN in one ear and FOX in the other.”

A tape from inside the room is said to be missing the 18 minutes that coincide with the reported time of the incident. Most of the nearby surveillance cameras were damaged or vandalized with some showing signs of blunt force trauma and water boarding. Other cameras had been forcibly ripped from the wall and remain unaccounted for.

The Congressional Laundry Room, the brain child of former Republican Iowa Congressman Larry Craig, was built in 2005 to accommodate members of Congress and the Senate who “weren’t comfortable exposing their dirty laundry where they were living or needed a quick fluff or blow dry.”

When Craig was arrested in 2007 for lewd behavior in a Minneapolis airport stall the Laundry Room was closed as the Capital Police were flooded with rumors of illicit affairs taking place on the folding tables. An investigation also found dozens of pieces of unclaimed underwear and large scale siphoning of coins from the machines.

Over the years since, the popular spot has also been cleaned out by authorities after they received reports of House members sniffing cleaning fluids in the storeroom, classified memos stuck to lint screens and a chicken found cooking in a dryer.