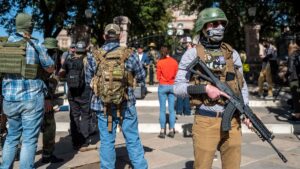 Republican members of the Texas Legislature are said to be considering introducing a series of bills that, according to a Texas official, reflects a mix of Muslim extremist Sharia Laws and Lone Star justice. The intent is to define all future legislation as either obligatory, recommended, permitted, disliked or forbidden.

A high-ranking Texas government official familiar with the discussions, but not authorized to speak publicly on the issue, said that “no one who’s involved in these talks wants to say it out loud but they’re moving the state into a more fundamentalist society that can only be described as repressive.

“Along with the recent restrictions that have curtailed voting rights, abortion and health mandates comes this expanded open carry law, if you want to call it that. Practically anyone who casts a shadow can roam the streets fully armed and half cocked. It’s easy to see why politicians feel they can peel back anything that offends them.

The only difference between on how the Taliban rules and the state of Texas hopes to is going to be about seven thousand miles.”

The source noted that GOP legislators from both the state House of Representatives as well as the State Senate are having informal meetings that are outside the scope of official business thus protecting them from public scrutiny. In addition, the Governor’s office and some members of the Texas’ Congressional and Senate staff are also thought to be involved in an advisory role.

Although many of the proposed laws may be considered draconian, that has never stopped right wing politicians from admiring their effectiveness. Some of the decrees that are being considered include the return of summary executions, the public maiming of convicted felons, and basing law enforcement’s use of stop and search on the ‘color of the day’.

In addition, they propose to allow the admittance in state courts of evidence based on plausible rumors and innuendos, limiting demonstrations on public property to no more than thirty minutes, determining the age of consensual sex by the older of the participants as well as considering life as beginning the moment of sexual intercourse.

Added the state official, “The conservative members of Texas want to be able to pass laws that are more in line with how extremists rule, not free societies. And who’s gonna stop them?  Certainty not the United States Supreme Court.”