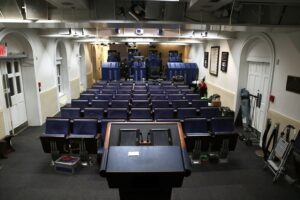 The philosopher Homer, Simpson that is, once said something like, “It takes two to lie…one to lie and one to listen.”  And no truer words better describe the relationship Donald Trump and the White House has with the American people.  Only in their case it only takes one to lie to millions of willing listeners.

For Trump, his deceit has been aided and abetted by a string of press secretaries who’ve repeated over and over again a series of half-truths, contradictions’ and outright lies.

First came Sean Spicer, who in spite of his suggestive name, dressed to depress. He came in a day one fibber who, in his first opening statement, “This was the largest audience to ever witness an inauguration — period — both in person and around the globe,” treated the American people as if they were all deaf, dumb and blind.

Spicer stumbled through his tenure with one hand on the lectern and one foot in his mouth. He ended up like the round school yard boy who stumbled his way to the head of the class only to wet himself. The slow and painful humiliation that Spicer endured before slipping out the back door was just a taste of the bizzararoma that was to follow.

And that would be Anthony “the Mooch” Scaramucci. He began his first, and last ten days, of his White House career with a couple of witty observations of his supposed colleagues. With endearing quips like “I’m not Steve Bannon. I’m not trying to suck my own cock” and “Reince is a fucking paranoid schizophrenic,” he capped it all off  by promising to “fucking kill” leakers within the administration.

Gone and soon forgotten for not ‘being credible’ Mooch was followed up to the podium by the more rustic  Sarah Sanders. Unlike her fellow Arkansan Bill Clinton who came from a place of Hope, she rolled in from Little Rock lathered with a generous helping of baloney.

Straight faced with sideway eyes she had the allure of a sock puppet. She peddled lies that Trump never paid hush money to an adult film star (he admitted he did), her boss created more jobs for African Americans then Obama (uh, no),  the idea that four thousand possible terrorists had tried to cross the southern border (actually it was six) and…well you get the idea.

As if that wasn’t enough, and it wasn’t enough, the preacher’s daughter had to admit that she made statements up just for the hell of it. Or, as she called them a “slip of a tongue.”

After three and half years of chucking the truth down a slippery slope Sanders position was filled by Stephanie Grisham. Grisham managed to ‘serve’ without even bothering to show up and do the job she was paid to by the taxpayers.  Still, not saying anything might have made her the only Trump press secretary who told the fewest lies.

Which brings us to Kayleigh McEnany’ a woman so confident, so without remorse, that she can stand up day after day spouting alternative reality sound bites at the American people not heard since Baghdad Bob trolled our country.

“No,” she says, “the president never lied to the American people”, which in itself is a lie since an actual recording of him doing so (over and over again) was practically playing in the background.  It’s as Orwellian as it gets.

Rehearsed and versed with her passion for the Christ affixed around her neck McEnany is truth’s Judas. Like her fellow disciples who have spoken from the press room pulpit she’s been schooled without principles. Obscured the obvious so as to be believed by the oblivious.

And so, to paraphrase another social observer of our time, Richard Pryor, one is tempted to ask the millions of forever Trumpsters, ‘who you gonna believe, Trump or your eyes and ears?’ Well, I think we can all agree on their answer to that.