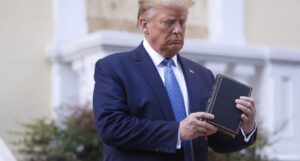 President Donald Trump is said to claim he has an “original copy of the Bible signed by the author.”  The president reportedly told a small group of religious advisors and a visiting White House tour group that he obtained the “first edition from a source that works in the Vatican.”

The president, in a tight re-election campaign, told members of his inner circle that he’s prepared to go public with an announcement in the near future and believes it will help sway any undecided conservatives and members of the Church.

According to a person on the White House staff, who asked to speak off the record, the president hasn’t publicly shown anyone the ancient text.  However he has said after its authenticity is confirmed by Fox’s Sean Hannity, Vice President Pence and the My Pillow guy he plans on calling a news conference to display it.

Religious scholars and members of the clergy are highly skeptical, to say the least, that an original copy of the tome exists. Equally puzzling “is the president’s alleging that he has one that’s signed by the author, whoever that would be,” said a theologian. Trump however insists it’s true although he’s not sure if it’s the Old Testament edition or “its sequel.”  In any case, he says it’s in pristine condition.

Dr. Neville Kissntell, a political professor at Barnyard University, says it may not matter if Trump ever actually displays it. “Trump supporters and others inclined to vote for him have taken as gospel pretty much anything he preaches, no matter how outlandish. As for the still undecided voters, this is either going to win them over or send them fleeing like the Jews out of Egypt.”

The anonymous source also said that Trump plans a series of other measures to capture the church going voters.  They include petitioning the Vatican for martyrdom status as well as implementing a strategy the Trump campaign calls the Virgin Mary.

In addition to the Bible, Trump said he recently purchased another ancient biblical relic from a collector. According to the president he has in his possession an autographed slip of parchment with the signatures of Peter, Paul and Mary superimposed on what was described by the seller as a ‘lute’.