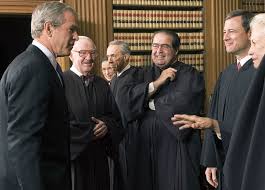 A former White House aide for George W. Bush said that the president offered a number of proposals in the aftermath of Hurricane Katrina that were “rather startling”.

A high-level discussion within the administration began shortly after the deluge of bad press involving the White House’s lack of a timely response to Katrina. The source, referring to his notes but asking to remain anonymous, said. “The President was feeling defensive and under a great deal of stress.  He felt that the Gulf Coast, the escalating war in Iraq and an ongoing investigation into government corruption were becoming distractions.”

Those events, the President told the staffers, were all shifting attention away from the real issues although he didn’t go into specifics. In the meeting the President  declared that now was the time for decisive action. He was ready to “put forth some bold ideas to re-energize the American people and get the country back on track. He dubbed it ‘Operation Shining Object’ or O.S.O.”

The then President Bush felt that the country often remained divided over many of the close decisions that were handed down by the nine member Supreme Court. With that in mind, he would propose to Congress the “addition of two more justices of his choosing to the court. By doing so he felt there would be a ‘big, fat majority instead of a little one which almost doesn’t count in the public’s mind.”

The President added he would tackle the mounting deficit by “proposing a change in the old fashion basis of our economy, gold, by moving to a ‘wood standard’, which will allow us to wipe out both our national debt and unused forests at the same time.” He believed that the Bureau of Land Management would go along with anything to keep its’ funding.

One other unifying ‘O.S.O.’ idea President Bush mentioned was to add some more color to the American flag. He felt that “the three colors we use represent the old America, red for the Indians, white for everyone else who got here early and blue for the sky or some reason or another” and were out of date. He wanted to add brown and yellow to show what an inclusive country we had become. He didn’t mention anything about the stars on the flag. The President then asked for anyone at the meeting with children to have their kids draw up some ideas.

“Listen”, the former aide explained, ‘”He was the President of the United States so we had to take anything he said seriously. After the administration’s WMD line had gone over so well and with a Republican majority still in Congress he believed anything was possible. Those of us in the room were cringing until the President said he ‘had to run it upstairs’ which we knew meant either Cheney or Rumsfeld would have to approve it. That was the last we heard of any of it.”

The source told us he decided to come forward after attending an Alcoholics Anonymous meeting.