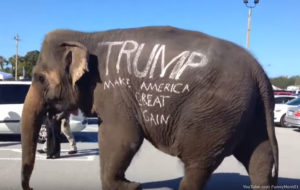 It’s been reported that one of the last of the Ringling Brothers pachyderms will be taking up the rear at the Trump Inauguration. The elephant is expected to lumber down the parade route spraying protestors while defecating the streets of Washington.

“A fitting image of what’s yet to come,” said one Democrat of the GOP icon.

As to the elephants, although recently unemployed, all but one of the herd had refused to participate in the event because of concerns they had surrounding Donald Trump’s son, Donald Trump Jr. The controversy has to do with a series of photographs that show the little Don shooting and killing nearly every species that disembarked from Noah’s Ark.

Said a former shop steward at the circus, ”Apparently someone who got laid off waved a lot of those dead animal pictures around the tent on his way out the door.  He told them the guy in all the photos was going to be their next president’s kid.

“That thing about elephants having long memories for some stuff is true but they also have really short attention spans. So there was probably some confusion among them as to which of the Donald’s the carney was talking about.  Still somethin’ got in their heads and yeah, they remembered.”

Another reason all but one decided to skip the event is that they were told that because of expected government cost cutting, rather then working for the standard ‘all you could eat’ peanuts, they’d only be receiving one each.

Said the lone elephant who was going, “What can I say, I love show business.”