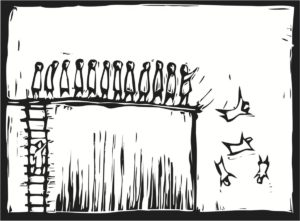 More On, a California think tank, has given the United States of America its 2017 “Lemmings To The Sea Award” in only the third week of the year. It’s the first time a country, rather than an institution or individual, has been chosen for the dubious distinction which recognizes ‘decisions showing a reckless lack of judgment and foresight equal to blindly jumping off a cliff.’

It’s not only the earliest, by some eleven months, for the presentation of the award but also the first unanimous decision by the board.

“It was obvious that nothing could top America’s bizarre turn of events so why wait,” said Owen Richards, head of statistical analysis at More On. “It’s also the only awardee that could possibly repeat for the next four years.”

The report mentioned a number of reasons for the selection including an election based on an outdated electoral college. However, nearly all of the points centered on the choice of Donald Trump as a candidate and the Republican Congress. ‘As a whole’, the report stated, ‘a collection of backward thinkers with little governing experience now given near complete control of the nations laws and direction.’

Other examples cited in the report included the immediate gutting of health care with no viable alternatives, attempting to dilute the Ethics Committee as the first order of business and nominating cabinet members ill suited or hostile to agencies they were chosen to lead.

“If that wasn’t enough,” Mr. Richards added, “there’s also threatening the freedom of the press and the conflict of interest running amuck within the administration. And this was even before the somewhat elected president had been inaugurated.

“It’s as if after eight years of partisan backseat driving, the nation finally gave the Republican party back the keys to the car and they promptly drove it into a tree. Then, they looked over at the smoldering wreckage and declared, ‘It’s good to be in the driver’s seat again’.”

Past ‘winners’ of the prize include the New Coke (1985), 20th Century Fox for allowing George Lucas to retain rights to ‘Star Wars’ merchandise (1977), NASA for using the metric system while Lockheed used the English system to build a failed spacecraft (1999), the U.S. State Department for employing Russians contractors to build the American embassy in Moscow resulting in massive security breeches (1969) and the Trojan Horse (1188 BC).