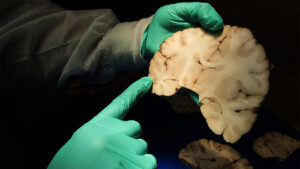 A leading authority of neurology believes some leaders of the Republican Party should have their heads examined for signs of cerebral damage, much like those performed post mortem on athletes suspected of having Chronic Traumatic Encephalopathy (CTE), a disease that impairs cerebral function.

Doctor John U.B. Lyon, Director of Neuroscience and Behavioral Research at Barnyard University, finds that like the deteriorating social and cogent behavior of people subjected to repeated blows to the brain, “members of the Republican leadership as well as a number of GOP candidates are displaying increasing signs of a disconnect with reality that points to underlining causes.

“Unlike athletes or their families and friends who have become aware of the obvious deterioration of their mental state, upper leadership of the  GOP and those around them seem to show little or no awareness of their condition.”

He went on to say that he’s not comparing the crippling effects of CTE to the recent outbreaks of troubling conduct by members of the GOP as well as a number of Fox News commentators.  However, Lyon said “it’s important to find out if it’s a neurological condition that is causing their outbreaks of bizarre fact free public statements, revisionist history and radically shifting principles.  Or is their behavior a result of just blatant self-interest.”

Lyon doesn’t expect it to be easy to persuade Republicans such as Ted Cruz, Lindsey, Graham, Kevin McCarthy and a couple of dozen other party members to step forward for a psychological examination, let alone volunteer to have their brains plucked, poked and pickled.

“But,” says Lyon, “we need to know the science behind it and we need to find out if it can be managed with isolation and drug therapy.  We also have to determine if it affects only entitled, smug white politicians and their enablers or could it spread to the general population.”

Dr. Lyon’s previous work includes an examination of unethical behavior in the Catholic Church, The Boy Scouts of America and the Houston Astros.

One Reply to “Neurologist: Senior Members Of GOP Should Have Heads Examined”