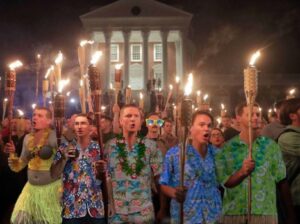 A study of participants in the Charlottesville, Virginia ‘Alt Right’ rally found that many in the crowd had little grasp of current and historical facts or even why they were there.

More On, a California think tank, sent representatives into the scrum at the alt right gathering in Charlottesville and conducted interviews with self-described members of white supremacists groups, Nazi sympathizers and other reprobates. Their purpose was to gauge the intelligence of the crowd by asking a series of questions on a variety of subjects.

“After analyzing the data we collected,” said Malcolm Anders, a spokesperson for More On, “we concluded that the root cause for the widespread ignorance we documented had likely been passed down for generations.  You just couldn’t teach that kind of stupid overnight.”

For example, in answering the question of “What is Roe versus Wade?”, a Supreme Court decision upholding abortion rights, thirty-eight percent thought it was an upcoming UFC fight.  Another twenty-one percent believed it was two of the choices you have when you go fishing while others couldn’t come up with a coherent response.

When asked who was buried in ‘Grant’s Tomb’, considered a fairly easy test of reasoning, forty-two percent had no idea even when prompted with “Take a guess.” Twenty-six percent wanted to first know if it was a video game and eight-percent responded by asking where the restrooms were or what time it was.

The report also mentioned that there was some confusion as to the purpose of the march. While the majority came to voice their blind hatred of anybody not like them, eleven percent were under the impression that they were there to prevent the removal of ‘the General Lee’, the automobile seen in the television show ‘The Dukes of Hazard’, rather then a statue dedicated to Robert E. Lee, a confederate officer.

In order to determine how many in the crowd had criminal records a member of More On made periodic announcements that “Anyone who is on probation should leave immediately because if found to be in the company of convicted felons you are subject to violating terms of your parole.” It’s estimated that nearly eighty percent of those within earshot left.

In a related finding, the study also found a significant drop in arrests for spousal abuse, DUI’s and opioid offenses in the surrounding counties while the march was in progress.