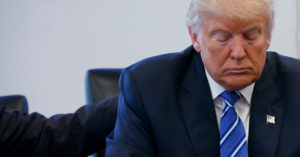 A recent study warns that President Donald Trump’s apparent lack of marital relations with his current wife Melania, could result in even greater instability in the oval office. Those findings were reported by More On, a California think tank, and included interviews with presidential scholars, gossip columnists and adolescent boys.

“There are many issues that can arise from a lack of sex in a healthy male, particularly one with a large ego and small hands,” said Barry Rudolph, a spokesperson for More On. “Some of those psychological problems can include heightened levels of anxiety, loss of self-esteem, frustration and impulsive thoughts and actions.

“For a man who touts his manhood and his ‘beautiful wife’ it seems odd that the president and the First Lady spend so little time with each other. It may be he has lost his desire, he is physically unable to rise to the occasion or she is no longer satisfied being with him. Also, this is a man who’s used to being on top in business but in politics he’s learning you sometimes have to bend over. That can result in some performance problems in all aspects of his life.

“Of course, the president may still find other means to gratify himself, not that anyone would want to speculate as to what they may be.” Rudolph said.

Although sexual desire tends to decrease with age in women, that is not often the case in men. For example, Trump has continually bragged of his sexual prowess, has sponsored numerous beauty pageants and has been pictured in countless photos with models alongside him.

He has also been accused of groping women, is the defendant in several sexual assault proceedings, has made numerous disparaging remarks in referring to women and, in an odd series of statements, described his daughter Ivanka, as “a piece of ass’ and someone he would have considered dating.

Trump and his wife Melania are rarely seen together and when they are he seems indifferent and she appears uncomfortable.  And, in the past the thrice-married Trump has never been one to shy away from marital indiscretions either in word or deed.

However, as president he faces greater scrutiny and can no longer expect the level of privacy that money can buy. For a man used to getting his own way he now has few options.

“The last President who is thought to have a near sexless relationship while serving in the White House was Richard Nixon and look how that turned out,” Rudolph added.