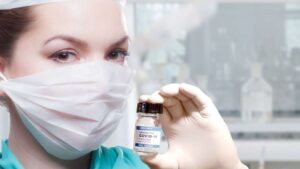 The Center For Disease Control is said to be preparing a national campaign that suggests taking any available Covid-19 vaccine could help cure male pattern baldness and add length to the male organ. The hope is that just the possibility that could happen will entice many of the still unvaccinated to get pricked.

According to a person familiar with the discussion, but speaking off the record as they were not authorized to discuss the matter publicly, the CDC will distribute “a bulletin that suggests a possible side effect of the vaccine is follicle regeneration as well as enlarging of the male penis during intercourse.”

Reportedly, results of the study of the campaign’s targeted audience of testosterone driven white males found that many were easily misled, lack fundamental reasoning skills and own an average of six or more guns. However, initial trials are said to have also determined that while the subjects refused to take a shot proven to prevent a slow and horrible death many didn’t hesitate to roll up their sleeves if there was a chance to add something up top and down below.

“At this point,” said the high ranking official, “everyone at the CDC is in agreement that the end justifies the means if it gets more vaccines into arms. It’s been clinically shown time and time again that the only way to manage a pandemic is through vaccinations. But here we are, practically begging people to save themselves. What a country.”

The announcement is scheduled to first be released through media outlets including Fox News, The Fox Network, Fox Deportes, FX, FXX, The New York Post and the Cartoon Network. It will also be promoted at upcoming MMA matches, NASCAR races, fitness centers and in supplement stores.

When asked if there was any data at all supporting the CDC‘s claims, the source said that while there is no proof that the vaccine would restore hair and compensate for male insecurity there’s no proof it won’t.

“People are going to believe what they want to. And that”, they added, “is how we’re going to play it.”

One Reply to “CDC: Covid Vax May Cure Baldness And Add Inches To Men’s ‘Reproductive Organ’”