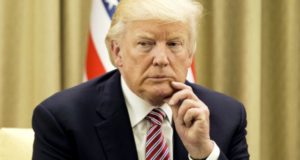 A recent MRI is said to reveal that large portions of President Donald Trump’s brain consisted of a useless ‘Styrofoam like’ substance rather than the essential white or grey matter needed to maintain a cognitive thought process.

The source, a physician at Walter Reed Medical Center who had access to the findings but was not authorized to speak, says that it was “astonishing that anyone could function with a cerebral make up better suited to ship a package. On a conventional intelligence scale, a person in his condition is more likely to draw stick figures on a cave wall. Yet he is not only the de facto leader of the modern day Republican Party but President of the United States.”

In the past, Trump has often given glowing reviews of his own physical and mental prowess. However, many health professionals who have observed his appearance and behavior don’t agree with his assessment. The president is often seen as one with a short attention span, a large ego and small hands.

Dr. Philip Scholls, Chief of Neurology at Barnyard University Hospital, believes that this is “one of those rare instances in science that’s both a mystery and an explanation. These findings would indicate that Trump is straining to use every bit of his brain to just eat and stay awake. For someone in his condition the effort needed to accomplish even those basic tasks leaves little room for any meaningful thoughts.

“It is not uncommon, “ said Scholls, “that such an individual would have a severely diminished capacity to process reality. Often, they have little self awareness leading to a never ending pattern of irrational decisions and actions. It’s also quite possible that this condition may be hereditary, as evidenced by some of the actions of his eldest sons Don Jr. and Eric.”

According to the unreleased report other tests found that the president’s feet are considered ‘petite’ for a man of his girth, he showed an inability to recognize certain colors and genders and has dangerously high levels of gas and bile.