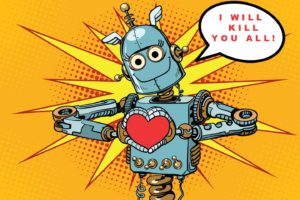 Artificial Intelligence (AI) will be to the human race what the meteor was to the dinosaurs – a gruesome ending to Earth’s current ruling party. That startling news comes from More On, a California think tank, in a blunt report said to be given at a roast for the company’s chief executive officer.

The speech stunned those in attendance not just for the timing of the announcement but also for the findings themselves. The apocalyptic predication was said to have been made by the firm’s leading analyst in what was to have been a lighthearted toast. However she “felt that the gathering offered the best opportunity to get this news out while many of her co workers had a drink in their hands,” said a high-ranking executive familiar with the findings but speaking off the record.

“Artificial Intelligence is going to drive humanity off a cliff like lemmings to the sea,” the source said. “At some point we won’t be able to dumb down AI far enough for it to continue to put up with the human race. We’re pretty much dead on arrival.”

The grim conclusions concerning AI, defined as any device that perceives its environment and takes actions that maximize its chance of successfully achieving its goals, are in a yet unpublished report informally known as ‘DnA’ (Death n Annihilation).  It includes input from teams of academics, private industry and former government officials. Also consulted were attendees of Comic Con, members of the studio audience at ‘The Ellen Show’, employees of the Geek Squad and Watson, the overbearing IBM super computer.

“Just look around,” said the executive while surveying the crowd at a local coffee shop teeming with millennials staring at computers and cellphones. “Most of them are looking forward to the day their cars will drive them home to live in a house they run by yelling at some box while they grope Harmony the sex robot in the corner. The increasing dependence of people on non human assistance to perform practically any function won’t be lost on the ever aware devices of the AI ‘community’.

“When the day comes that AI realizes that shows like “This is Us” is what passes for must see TV, Bobby Brown can still book gigs and a cartoon character can be president of the United States, well, it might actually think it’s doing mankind a favor by killing us all.”