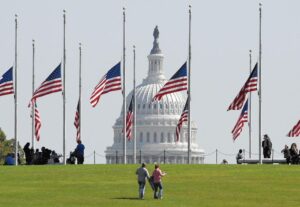 President Joe Biden reportedly plans on issuing an executive order to fly all American flags on federal property at half-staff every day.  The reason, said a White House source speaking off the record, is “because he feels if it’s not one thing it’s two others.”

Biden’s dour outlook is said to be a result of the constant calls he gets from members of his party in Congress as well as the ever-present drama that is portrayed in the media. Said the source, “the President is under increasing pressure to acknowledge every little thing that some vocal Democrats find racist, homophobic, excessive policing or just mansplaining, to name a few.”

Vice President Kamala Harris has reportedly been providing the President with a daily ‘white paper’ of troubling events that her staff has compiled. Biden is said to have become so overwhelmed with having to address each issue that he decided to just let a weary flag speak for the administration.

GOP lawmakers, with little recourse to the president’s declaration, have proposed reducing the height of federal flag poles by half to give the illusion of an upright stars and stripes. Said a party operative, “if there’s one thing the Republican party stands for it’s harking back to the days of old glory reigning supreme over the nation.”