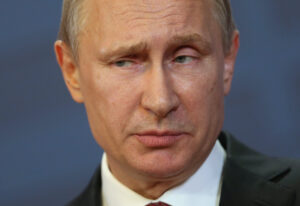 President Vladimir Putin’s recent decision to force himself on Ukraine may in part be due to a rumored case of impotence. Western intelligence officials have speculated that as a way to compensate for his debilitating condition Putin has thrust his country into war with Ukraine.

According to a high-ranking member of the U.S. State Department, who asked their name not be used, said that Putin, who at 5’7” is smaller than many babushkas wooden stacking dolls, has long struggled with his self-image despite his bellicose public persona. If it’s true that Putin is experiencing a blow to his sexual prowess he may turn his frustrations outward.

Doctor Raymond Ketoff, a urologist who lectures at Barnyard University, said that the  side effects of erectile dysfunction can include anxiety, low self-esteem, aggressive behavior and other psychological issues.

“Putin,” said Ketoff, “has long sought to project his manhood with a series of displays of his martial art skills, wilderness adventures and, of course his well-publicized bare-chested mounting of horses.

“But despite the position of power and prestige that a man may have, the mental and physical toll of erectile dysfunction can become all consuming. With Putin running a near dictatorship that can result in unpredictable behavior on a global scale as we may be seeing here.”

The details on his condition are said to be based on documents secured by a United States intelligence agent working on the Kremlin’s custodial staff.  Leaked copies of Putin’s medical records indicate his doctors, as well as scores of Russian prostitutes, have gone to great lengths to overcome what they’ve dubbed his ‘in-Putince’.

Putin, at sixty-nine years old, is experiencing the effects that age has on many men as they get older. Former President Donald Trump, seventy-five, is said to have suffered from impotence for many years. Many of his questionable decisions and actions may have been the result of a hormonal imbalance and other marital issues.

Added the government official, “It’s possible that the only way Putin can get himself off is to screw Ukraine.  One can only hope that’s enough to satisfy him.”