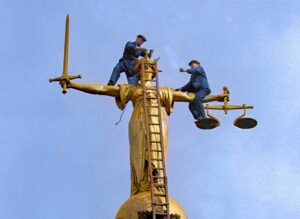 A legal brief being drafted by the Department of Justice is said to advocate the use of ‘summary executions’ as an “idea whose time has come again”. The term refers to immediately executing a person accused of a crime without a trial and is used primarily in lawless territories and dictatorships.

According to a high-ranking official within the administration, Attorney General William Barr has been tasked by President Trump to propose guidelines to “rapidly bring to justice any person plainly guilty of a heinous federal crime or, in some cases, about to be charged with one. Another reform being looked into is the admittance in federal courts of evidence based on plausible rumors and innuendos.”

The official, speaking off the record, said the White House’s position is that “people are tired of seeing obviously guilty cases meander their way through the justice system. At some point you’re past proving the person, or group, did it.”

One example was said to be the 2011 shooting of Arizona Representative Gabby Giffords. In that case the shooter, Jared Loughner, was identified and captured moments after he had killed six and injured others. He was eventually sentenced to life in prison rather than the death penalty. Showing disdain for the outcome the official remarked that, “even though Giffords was a Democrat, Loughner should have been strung up by the nearest tree, cactus or 7-11.”

A ‘silent petition’ is said to be circulating among career members of the DOJ objecting to the idea of summary executions on both legal and moral grounds. Barr, however, has made clear his position that “due process works both ways. Unlike revenge, justice is best served warm.”

According to another source, who asked not to be identified for fear of being forced to sit at the ‘kiddie table’ during White House functions, President Trump believes this issue could become a central platform in his 2020 reelection campaign.

Trump is said to be exploring other “out of the norm polices that align with his base as well as undecided voters in the coveted under educated, resentful and easily misled demographics. The president is reportedly also considering proposals to move the Second Amendment into first place, eliminating speed limits on federal highways and opening the foyer of the White House as a public mall with dining and retail outlets.