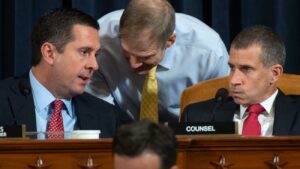 Republican members sitting on the House Intelligence Committee holding the impeachment hearings against President Donald Trump were reportedly so excited for the opportunity to be on the panel that they may have wet their pants during the proceedings.

The source, a custodian working for a company contracted to perform maintenance in the committee room, said it was the first time he had seen such widespread staining of chairs for a question and answer session.

“I’ve seen this kind of thing before, like when a celebrity or the Pope visited this place but not for something like this,” he said.  “When I came into the room some of the Republican members were giggling like giddy school girls as they were leaving.  Usually the Senators make their aides hold their folders but today a lot of ‘em were holding their own. When I went up to the dais to put away the nameplates it was easy to figure out who did what.

“And I gotta tell you something,” the maintance worker added, “that guy (Rep. Devin) Nunes and (Rep. Jim) Jordan really soaked them. I’m probably going to have replace those chairs after the room clears out.”

A spokesperson for the GOP adamantly denied its members were unable to control their bladders. “While some might say it seemed like the chance to ask rhetorical questions resulted in excessive moisture on the furniture it actually was a result of the humidity in the room.”

When asked why the Democrats’ chairs only had snacks and napkins on them the GOP spokesperson said, “I guess they must be cold blooded.”

The Democrats issued a statement denying they were ‘cold blooded’ and went on to say, “The room was very comfortable. It would seem that the Republican members are simply unable to control themselves when they don’t like what they hear.”

Said one long serving Democrat, who wished to remain anonymous, “You should have been in the House chamber when Obama gave his inaugural speech. There wasn’t a dry eye or seat across the aisle where my Republican colleagues sat. It smelled like a frat party over there.”

After the exchange of remarks everyone went outside for recess.