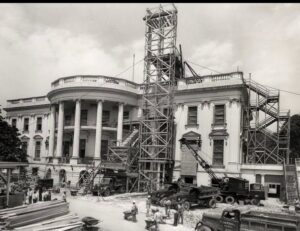 According to a source, President Trump is making plans to turn the White House foyer into what he calls the ‘People’s Lobby’ as part of the building’s scheduled August renovations.

The newly remodeled area will eventually be occupied by an assortment of retail stores, restaurants, sporting goods outlets, banks, pharmacies and a visa office. In addition, parking and sidewalks will be built over the Rose Garden to provide valet service and a car wash.

As often seen on television as the ceremonial grand entrance to the White House, the plans call for the up scale market to be located just inside those front doors in what is now known as the Diplomatic Reception Area. That room will be gutted as well as the adjacent Vermeil, Map, Library and China Rooms.

The source, a high ranking official, described it as ‘something that will become a leading historic and tourist attraction in Washington. And, I might add, by far the safest place in the world to shop and mingle.”

Representatives for Mr. Trump are said to be accepting bids from leading retailers and foreign governments to lease space there. According to the spokesperson, “Not a penny of the taxpayer’s money will go into building this. The response we’ve gotten from perspective tenants has been overwhelming and they are more than willing to spend whatever it takes to get inside the White House.”

Mr. Trump said in a statement, “It’s going to be a tremendous place. We’re going to have the best of the best with many, many beautiful choices. We’ll have merchandise from around the world including, of course, America.”

The President went on to say, “I’m so really excited. For year’s lobbyists and special interest groups representing weapons, drugs and banks have been the only ones with easy access to government officials. Now, with the People’s Lobby ordinary Americans will finally have a place to gather and get a chance to let their own wallets do the talking.”

Although White House historians believe that the extent of the proposed changes are not permitted Mr. Trump says that it’s within his right as the legal resident. “If the Democrats or any of the liberal media think they can stop me – well they can’t. They’re welcome to try but they’ve been so, so wrong before and I’m going to personally dig the first hole. And what better place to show America working again than right at my front door.”

Construction is set to begin shortly after Mr. Trump leaves for his vacation and will necessitate his staying at Mar-a-Lago or at one of his many properties until the work is done.

“We’ll be providing some really good paying union work for a short time followed by jobs earning nothing less then the minimum wage for years after,” a spokesperson added.

In another matter, representatives for Mr. Trump’s are said to still be negotiating with the federal government for its use of his likeness.

Said a spokesperson, “Mr. Trump was a brand long before he entered politics and as such has an obligation to command and control his image. When his picture stares out from an official document or his likeness has a nail driven into it by any government employee we want a licensing agreement in place.”

When asked who or what agency they would contact to authorize the terms of the settlement the source said it would be someone that they’ll be appointing soon.