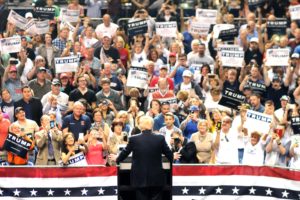 In a series of surveys taken of those attending President Trump’s rallies some thirty-one percent thought “Roe versus Wade,” the Supreme Court decision upholding abortion rights, was actually an upcoming UFC fight while another nineteen-percent believed it was two of the choices you have to make when you go fishing.

The report by More On, a California think tank, was conducted as part of a study of likely GOP voters and was commissioned by the Koch Brothers and Coors Lite. The survey took place at many of the president’s pep rallies including those in Alabama, West Virginia, Tennessee and Florida.

In responses to the question of who was buried in ‘Grant’s Tomb’, considered a fairly easy test of reasoning, twenty-two percent had no idea even when prompted with “just take a guess.” sixteen percent wanted to know if it was a video game, twelve percent thought it was ride at Silver Dollar City Amusement Park and others responded by asking where the restrooms were, what time it was or telling the questioner to “go back where you came from”.

According to those conducting the study many of the respondents had a high school education or less, often asked if they’d win a prize if they answered ‘okay’ and were regular viewers of Fox News and the Cartoon Network. Nearly all were white or whiter and the majority had little interaction or were wary of what they considered ‘the outside world.’

“After analyzing the data we collected,” said Mark Miwords, a spokesperson for More On, “we concluded that the root cause for the widespread ignorance we documented had likely been passed down for generations. You just can’t teach that kind of stupid overnight.”

In a related finding the study also noted a significant drop in arrests for spousal abuse, DUI’s and opioid offenses in the surrounding counties during Trump’s rallies.