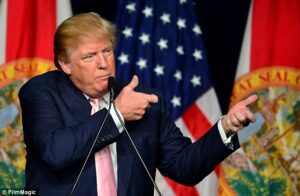 A portion of the redacted Mueller report is said to include an account of a young Donald Trump shooting a man on New York’s Fifth Avenue years before he was elected president.

According to a senior FBI official, who was involved in the investigation, a person described only as a ‘black man known as victim 7’, came forward to report the decades old incident after Trump declared in his campaign that he “could stand in the middle of 5th Avenue and shoot somebody and I wouldn’t lose voters”.

The source, who spoke off the record, said that a review by the agency found the person to be credible. However, since the incident reportedly occurred in the mid 1960’s the statue of limitations has since passed.  Said the source, “By now Trump’s probably right about no one caring after everything he’s gotten away with.”

In the report ‘victim 7’ is quoted as saying that he was staring at some mannequins in a window at 5th Avenue and 56th Street when he felt a sharp pain in his left arm. He recalled thinking that it may have been a bee sting, some roadway debris or perhaps a mild heart attack. But as he wiped off a slow stream of blood inching down his arm he picked off a small piece of metal stuck to the wound.

The man stated that upon looking up he saw a smoking rifle barrel sticking out of the rear window of a nearby gold Cadillac. As the victim approached the car he observed a ‘grumpy white man in a white sheet’ in the driver’s seat and a doughy orange haired boy tumbling out the back. He reported that the boy then ran over to a nearby street sign and began to pee on the pole. When the child saw the victim coming over he hurried back to the car leaving a trail of urine on the sidewalk.

As the car attempted to drive off the alleged victim said he hailed a nearby mounted patrolman. The officer initially blocked the vehicle but upon seeing the occupants of the car told the victim to “leave Mr. Trump and Donnie alone”. The victim then stated he saw the driver hand the officer some money and pass a sugar cube to the horse as the vehicle left the scene. There is no record of a police report or investigations after the incident.

The Report states that shortly after news stories surfaced that former Trump attorney Michael Cohen had paid off prostitute Stormy Daniels to protect the president the now disgraced lawyer was approached by the shooting victim. Although there is no indication of a payment the report says that the person was later offered a menial job in Trump Towers.