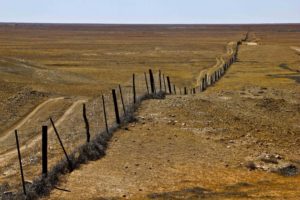 Donald Trump has reportedly ordered the Secretary of the Interior David Bernhardt and members of the National Guard to unify those states in America that claim the same name. He said “we have to settle any simmering differences starting with North and South Dakota and then move on to the Carolina’s as well as West Virginia and the plain Virginia.”

The President, speaking at a 4H Club convention in Iowa, told the young attendees and wandering barnyard animals that he “believes it is really, really important that before we even deal with those crazy Koreans we have to settle our own border issues be they foreign or domestic.”

“By doing soon I hope to avoid the conflicts that developed between North and South Korea, the bloody mess a divided Vietnam brought to this country as well as a repeat of our own unsuccessful civil war between the states.”

Although in his speech Mr. Trump didn’t offer proof of any unrest in those territories, a White House aide pointed to a Fox News report that had replayed the president’s earlier remarks as confirmation of his concerns that it could become “a clear and present danger.”

Reporters traveling on Air Force One asked Mr. Trump what prompted his call for action. He said he got the idea from looking  at a picture “hanging up at my place in Washington.

“I was walking down the hall and saw this portrait of the last great Republican president behind me, Abe Lincoln, staring at me. Tremendous president. He had some really tremendous ideas, although honestly there were some others I don’t think were so great. But I’m pretty sure he would have agreed that if he had paid a little more attention to what was going on around him, like I am, he probably would have thought of something sooner.”

When Mr. Trump was asked if he was familiar with Lincoln’s Gettysburg Address he said, “Did he live there? Really, I didn’t know that. But I can tell you this, his address in Washington was the same as I have now. We have a lot in common although I think I got more votes.”

The president was also asked about the comments he made about Hillary Clinton during his appearance before the mostly family friendly audience. Looking out before the crowd he had said, “Any farmer’s daughters here? Listen; do you know what Bill Clinton and I have in common? We both cheated on Hillary.”

When asked to clarify his remarks Mr. Trump replied, “What can I say, it’s true,” before walking off.