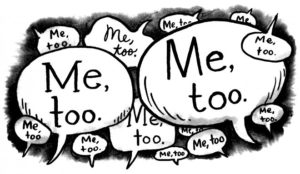 As it kills careers in the entertainment industry second only to the grim reaper, the #metoo movement is expected to next set its sights on the target-rich music industry, specifically rap and hip hop artists. That’s the conclusion of an investigative report in an upcoming edition of ‘Skeeter’, an urban oriented magazine.

According to a person familiar with the findings thousands of rappers large and small, or even just an Instagram account, are expected to be accused of sexual assault or harassment in the coming months.

Not surprising, the anonymous source added, the report also asserts that defending these artists could be the greatest growth industry to come along in a generation for private investigators, divorce lawyers, civil litigators, blackmailers and jewelers.

Using empirical evidence, as well as eyewitness accounts, the report concluded that for every one artist who has dropped a beat or a microphone there are about a hundred and thirty women and/or men who may have cause to bring charges.

Says the source, “even marginally known players will find it necessary to appear in court, social media or, as a last resort, on BET to deny or at least try to mitigate sexual misconduct allegations brought against them.”

In an anonymous poll of rap artists, over 116% admitted to having believed that when a woman said no, “it meant in just a minute”. The reason given for the statistical anomaly is the willingness of many respondents to ‘vouch’ for deceased musicians they knew.

“This brother was a dog,” said one of an artist who recently passed. “After a show when we go out to eat or clubbing he’d bite the waitress like she was on the menu. Those gold crowns ending up in his mouth didn’t get there just to make a fashion statement, he had to fill in the gaps he got from a good right across his face.”

Jamal Fellows, an attorney at the law offices of Cold, Hard, Kash and Upfront, says that accusing someone and proving it are usually two different things. However, when it comes to rappers “most of those guys incriminate themselves as soon as they release an album or shoot a video. Whereas other genres, such as rock and country western, have songs that may put the artist in a bad light, nothing quite says ‘I’m guilty’ like rap lyrics.”