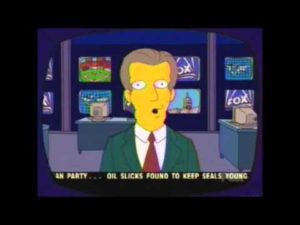 Fox News and the Cartoon Network are reportedly in talks to merge into what would still be known as Fox News.

“It‘s the perfect synergy between two leaders in their fields. This is an opportunity to cross over personalities from the two networks to offer viewers a unique and refreshing blend of commentary and insight as well as whatever Fox News can bring to the table,” said a source with knowledge of the talks but speaking off the record.

With the recent acquisition of much of 21st Century Fox by the Walt Disney Company it leaves the Cartoon Network as the only real competition for Fox News and their coveted white, unemployed, under educated and easily misled viewers.

“Unfortunately,” said the source, “with the restrictions of the deal we lost out on the chance to sign Disney talent such as Jessica Rabbit to replace Tomi Lahren as well as Cruella De Ville to take over for Jeanine Pirro.

“We had hoped to bring in Montgomery Burns and Scrooge McDuck to Fox Business as well as an opportunity to alternate the current hosts of “The Five” with Dopey, Sleepy, Grumpy, Happy and Bashful. Also on the table had been adding Pinocchio to guest host ‘Hannity’ when Sean was unavailable.”

Still, the source noted, some of the titles currently on Cartoon Network were attractive to Fox executives as the kind of programming that Fox News is known for. One example is the ‘Justice League’, which will be hosted by the Black Canary joined by Alan Dershowitz and Andrew Napolitano to offer legal opinion.

‘DC Super Hero Girls’, now featuring Poison Ivy, will add every girls’ role models Laura Ingram and Ann Coulter to share news coming from around the beltway; ‘OK, K.O.! Let’s Be Heroes’ which will change its story line to introduce everyday people who take the law into their own hands with hosts Radicles and Geraldo Rivera; and ‘Annoying Orange’ which will rebut critics of Donald Trump and anchored by Tucker Carlson and Bartlett Pear.

Reportedly, “Fox and Friends” will not see any lineup changes as it can’t be any more cartoonish then it already is.