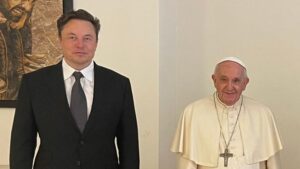 Elon Musk is on a mission to buy the Catholic Church in what would be the crown jewel of his extensive holdings.  Musk has reportedly told confidants that there can only be “one infallible person in the world and as Pope I’m the man for the job.”

Although the Church is not known to be currently up for sale a person close to Musk, speaking way off the record, said the billionaire entrepreneur believes he has the resources to make the nearly two thousand year old institution an offer “they can’t refuse.”

The world’s best known space cadet is said to have collected a massive record of the Church’s centuries old and still ongoing transgressions, persecutions, cover ups, murders and mayhem. “Even though the Church has weathered years of bad publicity there are some very incriminating things that can’t be swept away and, if need be, Musk is prepared to use them to take the place down,” said the insider.

The Boring overseer, according to the source, is confident he can negotiate a settlement and  then reimagine the outdated relic into a welcoming state of the art refuge that appeals to everyone regardless of their current religion.

Musk apparently became interested in acquiring the ancient gathering place when he recently determined he was a direct descent of Jesus Christ. The discovery is said to have come to light when he traced his DNA through his still secretive genealogical business tentatively called ‘X-Y See’.

Although Musk has fathered many children out of wedlock, threatens those who disagree with him, abuses his position and shows little humility he thinks he is up to the task of leading billions of the faithful around the world. And, in so doing, have more followers than he ever can on Twitter.

Added the source, “As Pope, Musk’s decisions and proclamations would be like the word of God to many and can’t be second guessed which is all he really wants. If the Catholic Church won’t deal he can easily buy Scientology and work his way up.”