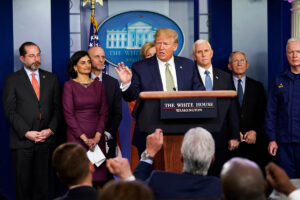 President Donald Trump was said to tell Republican lawmakers that one of the upsides to the coronavirus was its deadly targeting of the nation’s senior citizens and at-risk population that could result in a “once in a generation savings to Medicare, Social Security and other entitlements”.

According to a person who spoke off the record but had attended the private meeting of the president and GOP members of Congress, some of those in the room were “uncomfortable with the President’s remarks but at the end of the day they couldn’t disagree with his conclusions”.

The president has recently disputed the need to practice social distancing as well as the closing of non-essential businesses and events. Many of his close advisors, such as the Fox News line up of commentators and the ‘My Pillow Guy, are said to be encouraging him to return to ‘the way it used to be’.  However many, if not all, members of the medical community believe that doing so would result in a rapid spread of the disease and catastrophic consequences for the country .

Before he was elected Trump had vowed that he had no plans to touch entitlements but has recently said, “At the right time we will take a look at that” referring to cutting them as well as well as other social programs. Members of the GOP have also touted the idea as a way to balance the expanding budget deficit brought on by their party’s passage of ‘tax reforms’.

“The president is always finding ways to push forward with an agenda that he feels best serves the American people no matter any conflicting opinions or facts,” said the official. “In this case he plans on thoughtfully and deliberately moving forward with managing the virus.  And hand in hand with that the country can reap the financial benefits that comes with nature’s thinning out those who the president sees as taking handouts from the government.”

One Reply to “Trump: Flu Is Nature’s Way To Control Cost Of Entitlements”