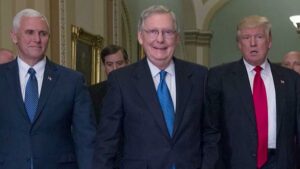 American intelligence sources, as well as a pack of cub scouts on a ham radio in Newfoundland, say they have intercepted communications between ISIS and other terrorist groups that looked favorably on decisions the Trump Administration has made. The communiques boasted of a perceived alignment between the goals of their organizations and the policies of the Trump White House and the Republican Party.

The source said that Sarah Sanders Ali al-Anbari, a spokesperson for  ISIS, made the remarks in a declaration that was posted on the terrorist’s website. It made the case that as President Trump and Republicans continue to gut health care, environmental standards, civil rights, gun reforms and longstanding alliances, they represent a greater threat to the American way of life than anyone outside the country’s borders.

“The United States is now being led by a pack of inbred hyenas and a deranged president opposed by a majority of the people,” Ali al-Anbari was quoted as saying. “Given time, they will divide the country and the infidels will prey upon each other like rabid dogs. Rather than unite them with acts of violence we can achieve our goal of destroying the great Satan by simply staying out of the way.”

ISIS is said to be producing a series of selectively edited video clips of President Trump and ‘his bootlickers’ making controversial comments that will further polarize Americans. They plan on routing them to Fox News, the Sinclair Broadcast Group and other conservative outlets where they believe they will show them without realizing, or even caring, about their true origin or intent.

“Our methods may not be the same but the outcome will be. Thousands of our martyrs couldn’t cause the suffering and death that millions of Americans will face from our Brothers of the Grand Old Party. And blessing of blessings, they can do it in a few weeks with just the stroke of a pen.” The ISIS spokesman said with begrudging respect. “But personally, we prefer the point of a sword.

“No one can turn the United States into a third world country quicker than Trump and the lackeys that serve him. He’s about as loony as they come and, believe me, I know loony,” the insurgent added.

A spokesperson for the White House denied any sort of ‘quid pro quo’ and blamed “the radical left, that idiot over at the Federal Reserve, all that stupid impeachment stuff and Biden’s kid”, for any difficulties aboard.