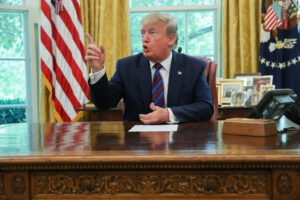 With the recent positive test for the Covid-19 virus by a valet assigned to President Trump the White House is seeking to fill that position with a member personally selected by the president.

A source within the Administration, who wished to remain anonymous, said that this is a rare opportunity for someone to get an “up close chance to prove their loyalty and subservience to the president in an intimate setting.”

Although in the past members of the military have been assigned to the valet position, Trump is said to be looking for that “special someone to, among other things, pick up his clothes and food wrappers, shine his shoes and reassure him he really is the legitimate president of the United States.”

Maurice Lyons, a professor of political science at Barnyard University, said that “within the current Republican party there is no shortage of people who have shown that they are more than willing to surrender their dignity and principles if it means they can personally benefit from it. If you research the term ‘grovel and GOP’ nearly every member of the Republican party’s name comes up.”

Although Vice President Mike Pence is considered Trump’s unofficial valet he isn’t being considered for a permanent appointment.  “Mike is doing just great now. He knows how to stand behind the president like a Stepford wife, give credit where it isn’t due and not exhibit any masculine traits that might upstage Trump,” said the spokesperson.

Some members of the Republican party, however, have reportedly made inquiries about the position. They are said to include past critics turned Trump loyalists Ted Cruz and Marco Rubio as well as actor Scott Baio and the ‘My Pillow’ guy.  But according to a yet unreleased list, South Carolina Senator Lindsey Graham is considered the front runner.

“Absolutely no one has shown the degree of self-debasement Lindsey has,” said the source. “Here’s a man who has turned his back on just about every meaningful political relationship and position he previously had to court favor with the president. Working as Trump’s lap dog is probably a dream job for Graham.”