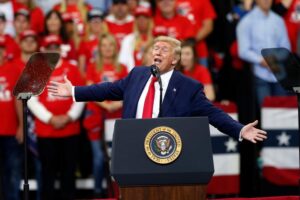 An internal document from the Committee to Re-elect America’s President (CRAP) is said to reveal some of the techniques they plan to use during Donald Trump’s upcoming campaign. The still unpublished report is said to include methods entitled ‘Crazy Like A Fox’, ‘The Reach Around’ and ‘The Virgin Mary.’

According to a source with firsthand knowledge of the study, but not authorized to speak publicly about the matter, CRAP had enlisted the Adamant Foundation, a conservative think tank, to compile techniques tailored to Trump’s base. In addition they are targeting those undecided voters ‘who are confused, easily misled or high school drop outs’.

One technique is called the ‘Reach Around’ which is meant to clarify two conflicting statements made by the president. Adamant is said to be providing a step by step guide to help the campaign massage the message in real time by stimulating attention elsewhere.

‘Crazy Like A Fox’ is another option and is used to increase the synergy between the Fox News Network and the White House. It streamlines the partnership and encourages them to ping pong back and forth proposed policy initiatives, comments and grievances. Fox News commentators give a degree of legitimacy to its viewers for just about anything they want to throw out there. This CRAP plan allows Trump to either say it first or quote a ‘reliable source’.

A more controversial suggestion is known as ‘The Virgin Mary’ and would be considered only under the most extreme circumstances. Said the source, “Any  objective person would realize that Trump has violated most of the Ten Commandments and all of the Seven Deadly Sins. But as far as the president’s base is concerned, he can do no wrong.

“It’s possible that Trump could proclaim that the Virgin Mary spoke to him and here’s what she said and his supporters would believe it,” they added. “But as best we can determine the only virgin Trump probably thought much about in the Biblical sense was Ivanka.”