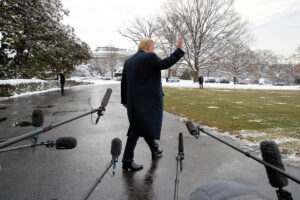 Literary agents, media bookers and celebrity publicists are reportedly fielding an onslaught of inquiries from Republican politicians, commentators and family members seeking to secure deals to rehabilitate their reputations in anticipation of President Donald Trump losing his re-election bid.

According to one editor at a leading publishing firm, who wished to remain anonymous to avoid alienating current clients, “There’s no shortage of Trumpsters who have suddenly had a ‘come to Jesus’ moment about being associated with him. I’m signing NDA’s (non-disclose agreements) like autographs at an all-star game.

“I expect that soon after the November elections, and the specter of ‘executive privilege’ begins to fall away, the market will be glutted with tell all tales and alternative narratives as well as untold speaking engagements. Right now, one of the things I’m trying to do is copyright book titles.  I’ve already submitted ‘Inside The Cabinet Cartel‘, ‘‘I Meant Well’ and “Blood Is Thinner Than Water’ to name a few.”

But for many seeking to cash in as they reform their image, they may find themselves not as welcome as they thought.  Said one television executive, “It won’t be easy to get bookings on their own terms when their spiel doesn’t appeal anymore to Fox viewers and fringe outlets. For network morning shows and prime time news magazines it’s going to be a buyer’s market.”

Still, the bigger issue they’ll have to overcome is one of credibility. “A lot of politicians who loudly supported Trump had at one time been his biggest critics,”said one producer. “As far as the public is concerned they’re going to come off as the opportunists they’ve shown themselves to be. Still, watching them publicly grovel makes for great theater.”

However, one sought after client is expected to be the president’s current wife, Melania Trump. “Here’s a woman whose life story is going to find no shortage of takers,” said a tabloid publisher. “It’s got everything, shameless sex, money and power all with a heavy dose of betrayal. Whatever you think of her, Melania is probably the one person that Donald is most afraid of.”