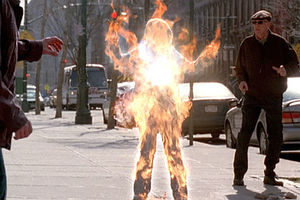 An alarming increase in cases of spontaneous human combustion (SHC) among Americans is reportedly due in large part to anger from the election of Donald Trump and a Republican led Senate. That’s according to an explosive study by a leading California think-tank.

Owen Richards, chief analyst at More On, said there have been 17 documented instances in the United States of SHC within the last six months. “That’s an incredible amount when you consider that in the last three hundred years or so there have only been about 200 reputable cases recorded.

“Reports of spontaneous human combustion are rare and easily discounted. However, the recent eruptions appear to be genuine and the numbers seem to be trending upwards.” Richards said.

The majority of victims, according to the report, were white middle to upper class women with college or doctorate degrees, active in the PTA or charitable organizations and read two or more national newspapers a day. Most ranged in age from the early forties to late seventies and lived or had lived in a major metropolitan area.

“From interviews and background searches we found that many had voiced strong liberal opinions on social media such as Facebook, Twitter and Friendster. Many dropped their on line accounts after the election, brought them back and dropped them again, so on and so forth.”  Richards said.

Others cases cited in the article included a man in his early fifties who exploded in his car on a Los Angeles freeway during morning rush hour and a thirty six year old woman who lit up the break room of the cable company where she worked as a customer service representative.

Statistically, the report noted, some of those who suddenly burst into flames would have likely died from natural causes in about the same time frame. However, rather then go relatively peacefully from a heart attack, stroke, terminal disease or a gunshot wound the paper concluded it was a combustive mixture of pent up frustrations and simmering rage at the current state of affairs that befell them.

According to Richards, “These people have literally gone past their boiling point. All it takes is hearing one more idiotic comment or decision out of Washington to ignite them. Once their bodies spark they light up articles of clothing, furniture and nearby pets.”

“That may explain”, added Richards, “why the study was commissioned by the American Kennel Club.”