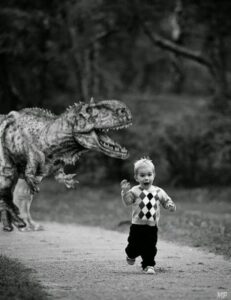 Donald Trump declared that if Joe Biden is elected president, “Planes will fall from the sky, pizza will only come with pineapple toppings and dinosaurs will again roam free in our cities and eat your children,” among other dire warnings.

Appearing before a raucous crowd in North Carolina of mostly white, unemployed locals as well as a smattering of high school graduates, Trump first asked if there were any “farmer’s daughters in the crowd” before unleashing a series of fact free accusations against his Democratic opponent.

“I’ve heard that if Biden’s job killing Green Initiative happens it will radically change the Earth’s gravitational pull.  And you know what that means…no more gravity.”

Trump went on to say that “Biden’s idea of the truth is that we’re in a pandemic that won’t go away unless we listen to know nothing scientists, cover up our beautiful faces, keep socialist distances and close our businesses until they all go bankrupt. What does he think this is, 1918? And I’ll tell you, there were a lot of great things about America in 1918 but stopping a Chinese virus wasn’t one of them.”

Trump told those in attendance that if he is re-elected, he would “protect your second amendment by moving it into first place ahead of whatever there’s now.”

He concluded the rally by warning those in the audience that if he lost “anyone who owns a truck will have their guns taken away and white women would be sold into slavery.”

Perhaps out of habit the crowd cheered those comments as Trump ambled off the stage.  As fights broke out and some attendees passed out from overdoses the president took off to his next rally at a Shoeny’s parking lot in Kentucky.

In the days leading up to the November 3rd election Trump has been barnstorming through swing states like a frenzied snake oil salesman with a dubious potion to sell. But for those who’ve been drinking Trump’s Kool Aid for four years, many are thirsting for more.

2 Replies to “Trump: “If Biden Wins Dinosaurs Will Eat Your Children””