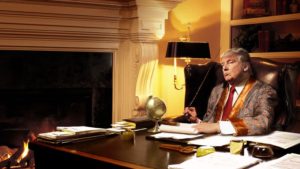 President Trump is expected to sign an executive order to replace the familiar English language alphabet and grammar with an American version to reduce the United State’s dependence on foreign imports. That decision, according to an unnamed  source, was discussed at a meeting with Secretary of Education Betsy DeVos and other advisors where the president spelled out his plans.

An audiotape is said to exist in which the president is heard to say, “America can’t let some other nation control how we talk to each other. Allowing the English, or the Great Britain or whatever they want to call themselves, to be our only source of language is a threat to both our national security and freedom.”

The president is first expected to deregulate some of the rules of grammar to make it easier for many of his supporters to read and write. His plans are said to include removing the mandate to always follow the letter ‘q’ with the letter ‘u’ as well as suspending the requirement of having to use ‘i’ before ‘e’ except after ‘c’.

Other changes include waivers for reasonably misspelled words over six letters, no restrictions on capitalization and permitting run on sentences if something is really, really, really exciting or important.

Added the official, “The president expects these changes to be as welcomed as the updating and rearranging of basic mathematical principals that was used by members of his administration to justify the tax cuts.

“We believe that once the guidelines go into effect the Government Printing Office will save millions and billions of dollars by getting rid of a bunch of regulations that placed an over zealous burden on having to use many of the restrictions of the English language.”

When asked if any of this would be feasible the official wrote back, “That’s a great qestion. And the answer is that I’m pretty sure you didn’t even notice I left out the ‘u’ when I wrote ‘qestion’. Am I RIGHT or am i rite?”